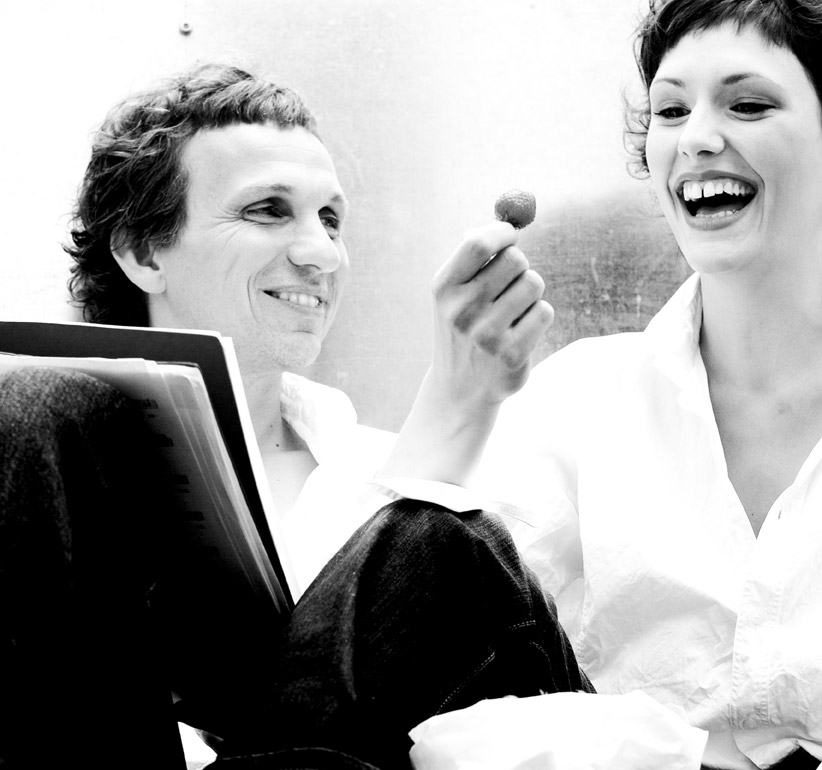 The newly composed Mörike lieder were performed by Saltacello with singer Sandra Hartmann under the title of “Rosenzeit-Zyklus” (“Time of Roses Cycle”). In 2005 and 2006, this cycle was enhanced with pieces set to texts by Claudius, Fleming, Goethe, Heine, Rückert, Schiller and von Wolkenstein.
In 2007, the lieder duo of Sandra Hartmann and Peter Schindler was awarded the Baden-Württemberg “Kleinkunstpreis” for these works. The “Kleinkunstpreis” has been awarded since 1986 by the Ministry of Culture of Baden-Württemberg and since 2000, jointly with Toto-Lotto, the lottery association. It is the most highly endowed prize and the only one awarded for smaller-scale works of performing art on a federal state level in Germany. The jury was captivated by the program “in which old love poems by famous German-speaking poets were combined with a contemporary musical language made up of jazz, pop and world music.”

Jazzpages
Peter Schindler’s musical interpretation is so successful that one can only be amazed how well the music matches the old texts.

Heilbronner Stimme
It is hard to believe that Eduard Mörike did not already have Peter Schindler’s music in mind when he wrote his love poems almost 200 years ago.

Radio Okerwelle Braunschweig
This is not cold-blooded art at work here, it is alive, it is delicate but at the same time passionate, it is life pure.

Rondo
The longer one listens to the CD, the more one is carried away by the freshness, the abandon and the directness with which, in this form, Mörike’s poems are still able to move the listener today.

Stereoplay
To Mörike’s lyrics, Saltacello magically creates an elegiac chamber-jazz sound full of detail, with echoes of chansons, Klezmer-melancholy and the tones of Kurt Weill’s ballads.

SWR 2
The dialogue with the past appears without a doubt to be headed for success, a touching and intelligent exchange with words and thoughts, which are in fact closer to us than we might, at first glance, think.

Saarbrücker Zeitung
Music somewhere between jazz and classical that is perfectly suited to the poems – and all is focused on the magnificent voice of Sandra Hartmann. She lives the lines, sashays, hesitates, scampers and sighs, savors or languishes – she is energetic and expressive just like Mörike’s poems.

Stuttgarter Nachrichten
Not only those who want to keep up with the times should treat themselves to “Rosenzeit” by Eduard Mörike – which is colorfully brought to life by the composer Peter Schindler with Saltacello and the extraordinary singer Sandra Hartmann.

Badische Neue Nachrichten
The lieder set out a pallet full of emotions deriving from the young Mörike’s world of experiences – a truly rich source for Peter Schindler and Saltacello, who are absolute masters of text-oriented musical creativity in a cross-over between jazz and chamber music.

Literaturblatt für Baden und Württemberg
Those who either don’t quite know what to make of the lieder of Louis Hetsch, Robert Schumann, Hugo Distler or Hugo Wolf, or have heard their fill of these, should, without a doubt, listen to the chansons composed by Peter Schindler, recorded with the group Saltacello and sung with sensitivity, subtlety, sassiness and vivacity by the young singer Sandra Hartmann.

Schwäbische Zeitung
Hartmann demonstrates with perfection the fact that Eduard Mörike can be interpreted in many different and diverse ways: she sang “Zwei Liebchen” (Two Sweethearts) with tender devotion, while in “Die Tochter der Heide” (The Daughter of the Moors), she transformed herself into a spitting, vengeful evil witch, whose performance was accompanied by Peter Schindler’s rushed, atonal passages on the piano.

Hör Zu
Eduard Mörike in jazz – that is a special gift for the poet’s 200th birthday.