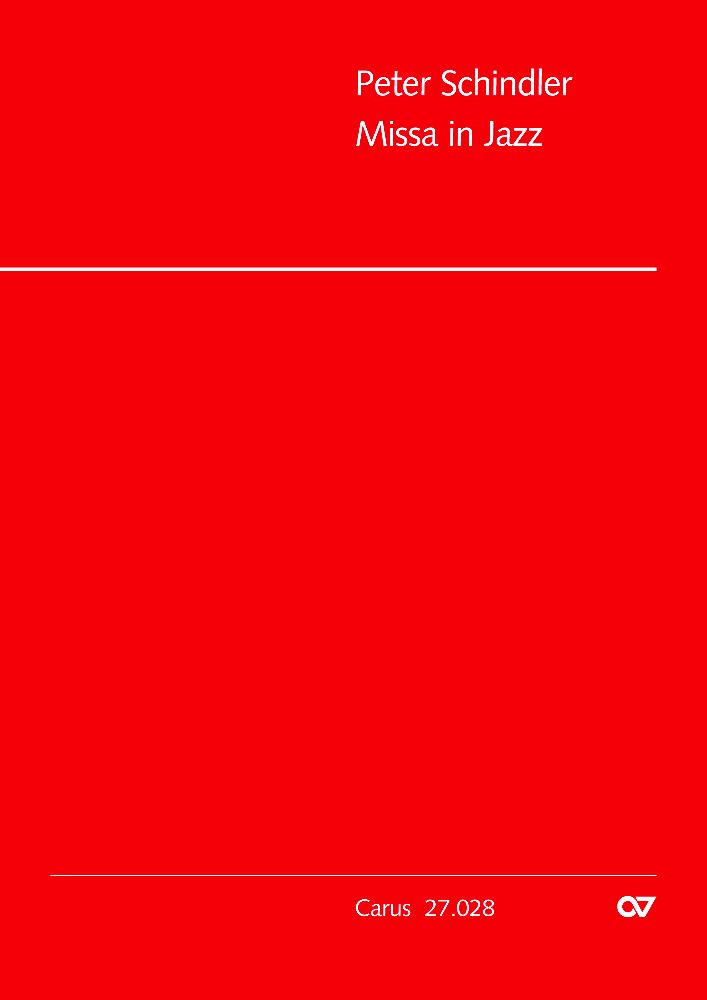 It was still back in the last century that the idea of writing a piece like Missa in Jazz (Mass in Jazz) really started to take shape in my mind. What I wanted to do was reach an audience that is not acquainted with the text of the traditional Latin Mass, through a contemporary interpretation of the Mass into a language of modern tones. Together with my colleagues from Pipes and Phones,  saxophonist Peter Lehel and percussionist Markus Faller, as well as the Junger Kammerchor Baden-Württemberg (Youth Chamber Choir of Baden-Württemberg) under the direction of Jochen Woll, I was able to intuitively and spontaneously realize this idea. While I was writing the composition, these musicians sang and played in my head; the piece was therefore, so to say, compositionally custom-made. The premiere took place on July 2, 2001 in the Alsatian town of Le Kleebach. Since then, the piece has been performed with the most varied of instrumentations and it has been choreographed, as well. In 2003, it was published in print by the Carus-Verlag.

It would be impossible to count the number of performances or the number of ensembles that have performed the piece since. To date, the Missa in Jazz has been performed in Germany, Italy, France, Portugal, Greece, Sweden, Denmark, Poland, the United States, Austria and Switzerland – by chamber-choirs, school-choirs and church-choirs, in churches, schools and theaters. I would like to take this opportunity to thank all of those who have performed this piece. Viva la musica!

Amazing variety
Truly amazing is the diversity of musical components that Peter Schindler introduces into the composition and how exactingly this richly-faceted collage, made up of Gregorian chant, Baroque and Romantic, is able to create a power and tension that communicates the hope and exultation of the prayers and hymns.
Bergsträsser Anzeiger 2013

Immense contrasts
Immense contrasts characterize Peter Schindler’s Mass, which, according to the oldest traditions, is based entirely on the Latin text of the catholic liturgy, but which he presents in a contemporary musical language, in this crossover project with African drum rhythms and jazz ballads. Light stands next to darkness; quietly fading piano next to an ever-higher driven forte; meditative passages next to explosive, euphoric singing. There is an ideal balance between the four-to-six-voice choir and the musical trio with saxophone, piano and percussion.
Schwäbische Zeitung 2012

Sensational
The Latin Mass has been (re-)interpreted countless times by countless composers, and each has attempted to appropriate the stylistic devices of their own era. That it was performed in a jazz style in St. Jakobskirche (St Jacobs Church) in Oettingen, however, was an absolute sensation for the Rieser Kulturtage (“Rieser Cultural Days”).
Augsburger Allgemeine 2012

According to all the rules of counterpoint
With historical consistency, the Kyrie started out using Gregorian elements but then flowed smoothly into syncopated jazz rhythms. Tearing a leaf from Bach’s notebook, the composer layered the Kyrie choral movement over the saxophone choral. The Christe Eleison flared up in romantic sound colors and a soulful, bluesy saxophone solo swayed over swinging jazz brushwork on the drums. In the Gloria, the composer developed the theme in strict contrapuntal fashion, fusing classical and jazz elements into one.
Schwäbisches Tagblatt 2012

Nothing is predictable
In their modern interpretation, the texts of the Latin Mass took on an interesting, but more than that, an extremely powerful quality. In his jazz-Mass, Schindler employs a wealth of compositional methods and shows his pronounced proclivity for combining them in the most unexpected ways. Nothing is predictable in this work. It is, however, interesting from start to finish.
Schwarzwälder Bote 2012

Marvelous major choral work
The Missa in Jazz is a marvelous major choral work that combines a Latin text with a contemporary setting. The composition has all the elements of jazz, including rhythmic drum percussion and saxophone riffs, but the vocal arrangements are soaring and melodic, a piece of music that brings a subtle jazz influence to the Latin Mass without sacrificing its solemnity.
Saint Michael’s College, Vermont, USA 2012

Anything but irreverent
In his Mass that premiered in 2001, Schindler brings together traditional liturgical choral music with jazz, making full use of the potential the latter. The influences range from Klezmer to folk, rock and pop but, in spite of this diversity, the composer eschews any cheap sensationalism: the Mass remains a sacred work.
Above and beyond its religious claims, the modern tones and rhythmic finesse of this work make it a source of great pleasure. Finger snapping, foot tapping, clapping along – one seldom experiences these at the performance of a traditional mass, but they fit perfectly here – and anything but irreverently.
NWZ online 2011

With all its textures
Already with the Kyrie one experiences the special uniqueness of the many threads that go into making up this composition. Very quietly, the men’s voices begin; the women follow, solemnly and with dark tones; then, the entire choir – until the musicians enter with their jazz-rhythms and bring the Kyrie into a lively and vibrant full swing. Then comes the Christe Eleison, carrying it back to its more quiet tones. The saxophone is to be heard throughout the Mass and time and again, it echoes the mood – the Gloria and Credo, the Sanctus, Benedictus and Agnus Dei.
Schwäbische Zeitung 2010

Philosophical meditation
Schindler is a composer with his own distinct style. He studies his textual sources with extra special care and attention. His musical rendition of the text of the Latin Mass transports one into a philosophical meditation, to a commentarial exchange that delights the public. He creates a Sanctus that is so unfamiliar that the act of worship seems almost painful. Through the most difficult bass patterns, which repeat over and over again like a mantra, the voice of the choir moves between exultation and derision and topples from musical chaos into elegiac bewilderment. And at every point, the singers and musicians are exposed to incredible challenges; grotesque rhythmic adventures are successfully executed, some passages even call for acrobatic vocal chords. The dissonant build up of sounds demands incredible mastery of the singers’ voices.
Waiblinger Kreiszeitung 2010

A tonal challenge
Tonal challenges for an audacious choir: at first glance, the piece is annotated in a traditional manner – sporadically, a solo-sax blares out, annotations such as “groovy organ” give an idea of the style. The melodic-rhythmic-harmonic subtlety reveals itself as one listens to and studies the piece; it also affords, however, the possibility of a very practical study in harmonics.
Jazz-Zeitung 2009

A plea for tolerance
It unites the Middle Ages, Baroque and Romanticism with the contemporary. It captures Afro-American jazz and Jewish-Oriental styles. Schindler’s world music may be an ambitious plea for tolerance or a global play with harmonies and rhythms – in any event, it brings on a sustained round of ovation for the performers.
Mannheimer Morgen 2009

Powerful and devout
This music arouses – in the case of the Sanctus to a superhuman level. The text of the Mass is repeated time and again until it becomes familiar to the ear – and then: a short Dona nobis pacem (Grant us peace), which, due to its brevity, is all the more powerful and devout.
Traunsteiner Tagblatt 2008

Independent
Schindler’s Missa in Jazz is an independent work. Vibrant. Expansive. Passionate. Tenacious and of ever-increasing intensity with the many litany-styled repetitions. Pious without incense. Replete with a driving energy. Grating and tender. With abrupt final chords that are hit as if breaking from full speed, and yet time and again, moving in its intimacy. The work ends soberly and quietly with the Agnus Dei, a last appeal for peace.
Reutlinger Generalanzeiger, 2007

Quiet and Stormy
In the most brilliant way, Peter Schindler’s Missa in Jazz united the sounds of the organ, saxophone and percussion in the Pipes & Phones trio with the sounds of the Junger Kammerchor Baden Wüttemberg (Youth Chamber Choir of Baden-Württemberg) in the Strasbourg Münster. While the bells of the Münster chimed in fifteen-minute intervals, the thirty choir singers melded contemporary music with the over two thousand year-old Christian texts. Kyrie, Gloria, Credo, Sanctus and Agnus Dei spirited away the thoughts of the several hundred listeners, carrying them up into the majesty of the place’s architecture. Quiet and storm, harmony and solo. In the end, an eloquent calm, and a loud applause.
Dernière Nouvelles d’Alsace, 2007

To startle and appease
On the one hand, the juxtaposition of jazz-improvisation, Gregorian choral music, Baroque polyphony and the sprinkling of pop prompts one to reassess listening habits and expectations. On the other, however, the musical renderings of the Latin texts are in some cases so unusual that they command a new and heightened level of attention. In whichever way one wishes to interpret this act of being startled and appeased, without a doubt, it raises questions, perhaps also objections.
Mannheimer Morgen 2004

Meticulously balanced details
Deliberately, the composer and organist integrated into his piece (written in 2001) – which, after all, from a time-dimension, can be considered a match for Beethoven’s Missa solemnis – echoes from the thousand-year-old history of setting mass texts to music. He combines these historical echoes with rhythms and tones from contemporary jazz.
The result is a succession of extremely imaginative movements, which do not deny their origin, content and emotional imperative as being from the Ordinary Mass. Yes they gain momentum through the jazz instruments – saxophone, percussion and organ. The first impression is positive and resonating, while upon closer listening, one also recognizes discerning craftsmanship, richness, complexity and meticulous attention to detail.
Badische Neueste Nachrichten 2003

The Heaven of Music
“Hosanna in excelsis – this is about the heaven of music, not that of Luther or the Pope.”
Stuttgarter Nachrichten 2001